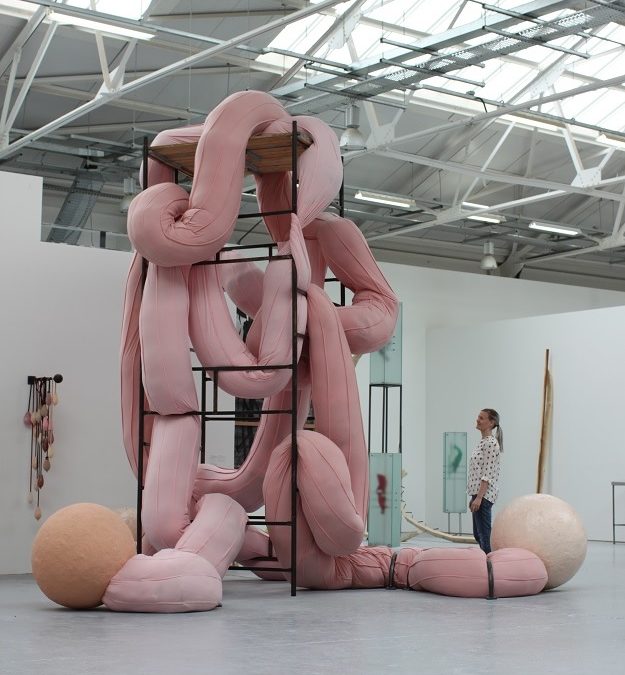 Huddersfield sculpture artist Lauren Kelly is coming to Dog Eared Gallery! See it with your very own eyeballs!

Bosse & Baum present Digesting the Devoured Lauren Kelly’s biggest solo exhibition to date, which showcases a new site-specific installation of large-scale sculpture that will expand to fill the space. Lauren works with sculpture and installation, focusing on investigating the power of fetish. Influenced by Eva Hesse’s and Louise Bourgeois’ interest in bodily forms, her work flirts with ideas of fertility and fecundity, while her repetitive forms allude to body parts. The monumentality of scale in her work and its enveloping presence urges you to walk amongst it, whilst the smaller nipple and phallic-like sculptures seduce you to want to touch and squeeze them. Kelly works with a multitude of materials on an ambitious scale creating a visual delight of welded steel structures and soft fabrics, which recall flesh tones, bringing out the nakedness of the metals.

Kelly has recently completed a commission for the Comme des Garcons in New York and her work was purchased by the Royal College of Art for their collection. She was selected by renowned British artist, Richard Wentworth to participate in the group show, Muse, in Lempertz, Berlin. In 2012, Jessica Sainsbury purchased Kelly’s Mount, Frolic, Romp for her private collection, now at Cowley Manor in Gloucestershire.

20 April / 2 – 4 pm – Speech! Speech! the second in a new series of The Onion Discussions, organised by Jack Tan and Elizabeth Porter, with nibbles and performances from Lauren Kelly,Geoff Tibbs and Josie Pearse.