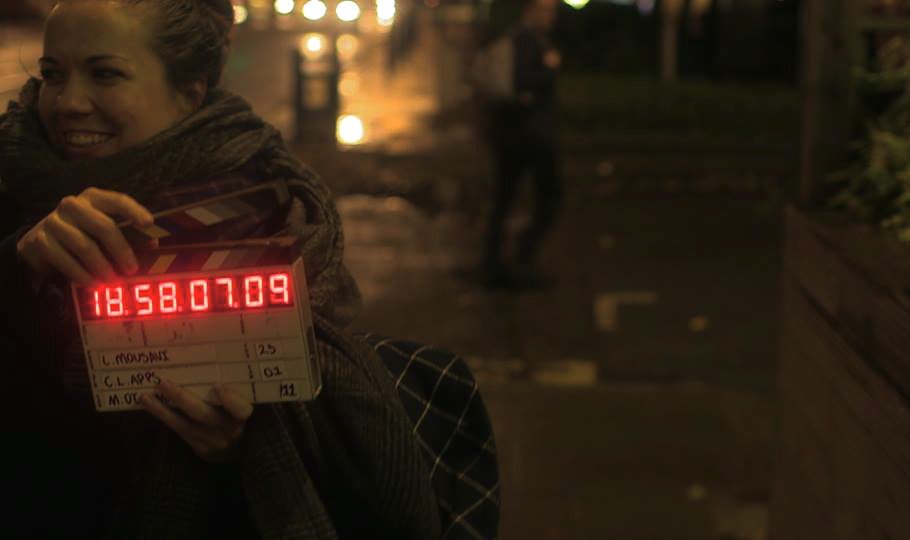 Our head director Claire Leona Apps was interviewed by Emma Hanson of Rianne Pictures about being a female director.

See what she has to say here.

FEMALE DIRECTORS SEASON: CLAIRE LEONA APPS
August 30, 2017
Claire Leona Apps has been working in the film industry for over a decade, shooting as far afield as Asia, directing accomplished actors and has been commissioned by a diverse range of sponsors. Not to mention setting up her own production company Dog Eared Films and the related creative hub Dog Eared Studios. Her debut feature ‘And Then I Was French’ has been described as ‘a kooky, genre-twisting commercial thriller with a surrealist tilt’. Here she talks about the progress of moving from short films to features and finding your way in the industry.

AFTER GRADUATING FROM LONDON FILM SCHOOL HOW HAVE YOUR EXPERIENCES IN THE INDUSTRY BEEN?
I knew I wanted to be a writer/director and I always knew I was a storyteller. However, the particular journey was not specifically outlined. I tried lots of different things with my eyes always looking to the stars but my head down, working hard. It’s a necessary contradiction for this particular career. What I did not expect was how much I would have to be an independent force – that I would be required to fuel the ship as well as steer it. As they say: no one is “discovered” anymore- no one is waiting for you to be a genius. It has been a lot of hard work but the reward to this independence is to create what I want and watch my company expand.

WHAT FIRST INSPIRED YOU TO GET INTO DIRECTING?
I’ve always been a very cerebral, imaginative person. As a child, I would invent vivid fantasies/stories and still do. In terms of wanting to do this within film, it came from a deep-rooted love of stories that hold a mirror up to society – making us question our moral standpoint. This is why people first started telling stories; horror stories around campfires, religious foreboding tales or fairytales to encourage hope etc. Stories both encapsulate life and manipulate it in equal measures. Film and TV have the furthest reach, they enable the unbelievable to be real and were my first love. My heroes range from Jim Henson to Cronenberg to the Coen brothers. And women, of course: but maybe their storytelling came in the form of songs, photos or books like Nan Goldin, Ani Difranco and Margaret Atwood. Hopefully, the number of females that can influence film will grow greater for the next generation.

YOU’VE DIRECTED SEVERAL SHORTS INCLUDING ‘RUMINATE’ AND ‘PLASTIC LOVE’, BUT MOST RECENTLY YOU CREATED YOUR DEBUT FEATURE FILM ‘AND THEN I WAS FRENCH’. HOW DID YOU FIND MAKING YOUR FIRST FEATURE FILM IN COMPARISON TO SHORTS?
Features are novels and shorts are poems. Both require a lot of thought, preparation and are challenging in their own way. However the time commitment of a feature film is something you can never be prepared for. Your mind starts working and it does not stop buzzing and reevaluating for many, many years. People said it was like my first baby and in a way, I think it was. You feel responsible for everything and it has a life larger than you. It takes more of people’s lives – both for the audience to consume and for the people that work on it. I loved it and preferred it. Especially when it starts to walk on it’s own two feet.

WHAT DO YOU HOPE THE AUDIENCE TAKES AWAY FROM IT?”
It’s essentially my scathing view of romantic comedy plots that feature women who alter everything about themselves in order to get the man. It asks the question if this level of self-alteration leads to a healthy and happy life. Many of us can get fixated on wanting to change something: become skinnier, smarter, cooler, richer et al- when in truth you can spend your whole life focused on ambitions without registering time passing by. It’s a very yogini thought process but in this consumerist world it’s wise to question if you would prefer to be a human with faults or a perfect commodity. It’s harder than it might seem to be clear about this differentiation- especially in a social media centric world. Appearing happy and being happy are very different things. Though I do promise you: your last regret on your deathbed will not be : “I wish I had better ab definition”. Also- I hope they admire Joanna Vanderham’s performance.

FUNDING TENDS TO BE A STRUGGLE FOR MOST FILMMAKERS. WHAT HAVE YOU LEARNT SINCE BEING IN THE INDUSTRY TO OVERCOME THIS PROBLEM?
I don’t think you ever overcome this problem, I’m afraid. There is always an ebb and flow between financiers and artists. Mainly because people with money want to maintain it and invest in sure things, but sure things are usually (and sometimes incorrectly) diagnosed as pastiches of other things that have been successful. Real art or game-changing filmmakers stick their necks into the unknown and that’s scary for investors. Best I can suggest is to consider your work on a universal level: what is the wide appeal and who is the audience? Why would Shaun from Dorset want to watch your film? Figure that out and articulate it clearly. And if Shaun would hate it and only your best friend since birth would relate then maybe have another go at that story arc. At the end of the day, most people’s diaries are boring unless you’re Aziz Ansari.. and you’re probably not. Everyone wants to do these “Master of None” stories about everyday life but it’s a very tricky genre to pull off to that level of success.

AS THE FOUNDER OF ‘DOG EARED STUDIOS’, WHICH PROVIDES PRODUCTION FACILITIES TO FILM-MAKERS, PHOTOGRAPHERS ETC., WHAT APART FROM FUNDING DO YOU FIND ARE THE MAIN ISSUES FACING PEOPLE HOPING TO SET UP THEIR OWN PRODUCTION COMPANIES?
Get good people that can do good things. At the start, the most important thing is to find a community that understands your work and wants to work with you. It’s difficult to get off the ground without rubbing each other’s shoulders a bit. It’s an apprentice-based profession where you have to earn your stripes. I think the hardest thing is understanding how long it can take to get to where you want to be in this job. I look back at 20-something me and realise I was green. It’s a long, long trip so enjoy the ride and don’t get too big for your boots. I’ve seen many peers spend more time being arrogant than making work and it is not a good look. Get a calling card- we are so lucky to live in the age of having access to equipment, even if it’s your smart phone. At the end of the day David Lynch could make something world changing on a phone, so give it ago and have something to show for it.

AND FINALLY, WHAT HAVE YOU GOT PLANNED NEXT FOR DOG EARED FILMS?
There are two new films in the works and a TV show. Also expanding into US and Canadian co- productions. Watch this space!

You can view more of Claire’s work on her website, her social media handles are also below.